If you’ve been following the recent series, we’ve been looking at how to create the perfect native ad.

So far, we’ve looked at how to choose a hook for your ad… how to write a headline…

And in today’s post, we’re going to look at how to select the right image to use.

First of all, if you haven’t already read the two previous parts of the series, you can view them here and here. I highly recommend you check them out, as you’ll be able to start constructing a powerful ad (ya’ know… one that actually converts) …

And get the first two parts right, and you’re well on your way to a super-successful campaign!

OK, so let’s get stuck into the specifics.

Before you even think about finding imagery to use in your ad, it’s important to know your market.

In essence, this means you should always be putting out content that resonates with your market. A good example would be showing young men pictures of attractive females (the fewer clothing items, the better!).

Another example would be not using overly-obtrusive imagery if you were marketing to the elderly – calmer, more sophisticated ads are likely to work better. 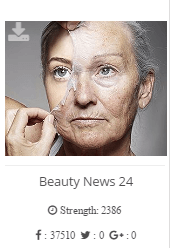 Have a look at the image on the left – that’s a perfect example of an image (and in fact, an entire advert) that’s designed with the target market in mind.

The image itself is directly appealing to the older markets. It shows an elderly woman exposing younger skin by literally ‘ripping off’ her old-skin. This advert probably wouldn’t appeal to younger generations (aside from perhaps a curiosty factor), but ageing women or women who are concerned about being old, will almost certainly be taken by the imagery, and want to know more.

That’s a short example, but it shows you how powerful an image can be – the ad above has a VERY weak headline, yet look at the strength rating – it’s an ad doing incredibly well. So it’s worth remembering that an image can literally make or break your campaign. 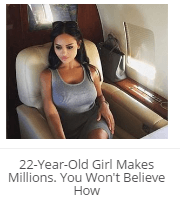 Alright – so we have a VERY attractive female… a private jet… and a claim which tries to have us believe she’s 22 ( I mean come onnnnnnn… either the ad’s creators are just outright lying, or her parents funded… er… cosmetic surgery)…

Regardless, this ad has done a couple of things wrong. Firstly, the ‘make money online’ industry is incredibly saturated. Everyone’s seen income claims about how it’s possible to make ‘millions’ blah blah blah. Combine that with the hot girl, riding a private jet…

And the older audiences (the ones with money), will very likely be unimpressed with the ad, and won’t even bother clicking in the first place.

See how it’s important to choose an image that actually matches your markets desires and nature?

Using ‘Clickbait’ Images To Lure Your Audience Into Clicking.

Ok, so I’ve just spent the last 5 minutes telling you how important it is to choose imagery that resonates with your market, and to avoid ‘gimmicky’ imagery to get clicks…

Now I’m going to completely contradict myself, and say that you DO need to put something in front of consumers that fills their desires.

Now that’s not to say you can just pick any old image, and throw it into your ad…

But you CAN play on your markets inner-most desires, and use this effectively to choose the right image.

Let’s look at a couple of examples; 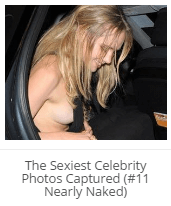 First off, we’ve got the classic nearly-nude female. OK… I KNOW this is a generic example (and somewhat cringe-worthy), but there’s a reason why these kind of ads keep popping up – THEY WORK!

You’d be amazed how many guys click these kind of ads just to see more of the girl in question and, while it’s important the image is relevant to your advert, it’s a really effective tool at driving more traffic and getting clicks. 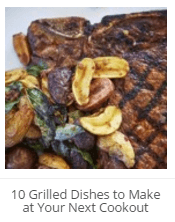 This is a very interesting form of imagery. Believe it or not, this image is actually considered ‘clickbait’, in the sense that it looks so delicious… tasty… ‘get inside me’ kinda vibe, that it makes any food lover want to click.

Now don’t get me wrong, it’s incredibly important that you tailor the imagery to your specific campaigns…

But if you can find an image that resonates with your market, AND plays on their desires, wants, and needs…

You’re already onto a winner.

See, some of the best ads ever created are what’s called ‘curiosity inducers’. They give away a TINY bit of the ‘big picture’ – but they keep enough hidden, so that we naturally want to find out more.

For example, look at the ads below…

Both of these ads purposely only show us half the picture – we’re meant to see them as sexual (when in reality, they’re probably not that sexual at all), but this is done for a reason.

Not only do these images appeal to the male crowd (for obvious reasons), but they frustrate us. We only see half…

Which is a great angle to take in order to attract interest around your ads, and generate clicks.

OK, so that’s three of the ways you can select imagery for your campaigns.

Most importantly, just try to tie it into your ad. Don’t place images of half-naked women just for the sake of it – not only will people likely leave your page when they realize you’ve ‘clickbaited’ them without giving them real content, but it also makes you look bad, and hampers your ads performance.

Try to find an image that resonates with your market… makes users want to click… as well as frustrating them (telling half a story).

Manage all three aspects, and you’re well on your way to producing a winning campaign.

Let me know how you get on, and feel free to comment below with any questions.

The final part of the ‘creating the perfect native ad’ series is a short post about testing (fun I know)!

(and if you were wondering,  the images was pulled from NativeAdBuzz – the Internet’s best native ad spy tool. You can claim a $7 trial by clicking here.

Sayonara until next week!