Thanks for keeping with us through our arbitrage diary, we both really appreciate you following our story!

You’ve got Jake to take you through this week (back from my holidays and nicely sunburnt, as per…), and then Dan will be back for next time.

We have a bit of a two-part blog for you now – a real ups and downs story. It’s fallen to me to take you through the good stuff (and I mean REALLY good… i.e. $$$$$$), then Dan will address the not so good… but don’t worry, it’s all leading to a big resolution.

Yep, that’s right, he will be discussing how to get Nessie arrows back. I’m doing big profits today, then next up will be our ‘disastrous stretch’ and the loss of our arrows… AND how we got them back. But you can’t hear how to get them back until you hear how we got to the point we lost them!

It has been a very eventful summer, so let’s start with the good stuff! 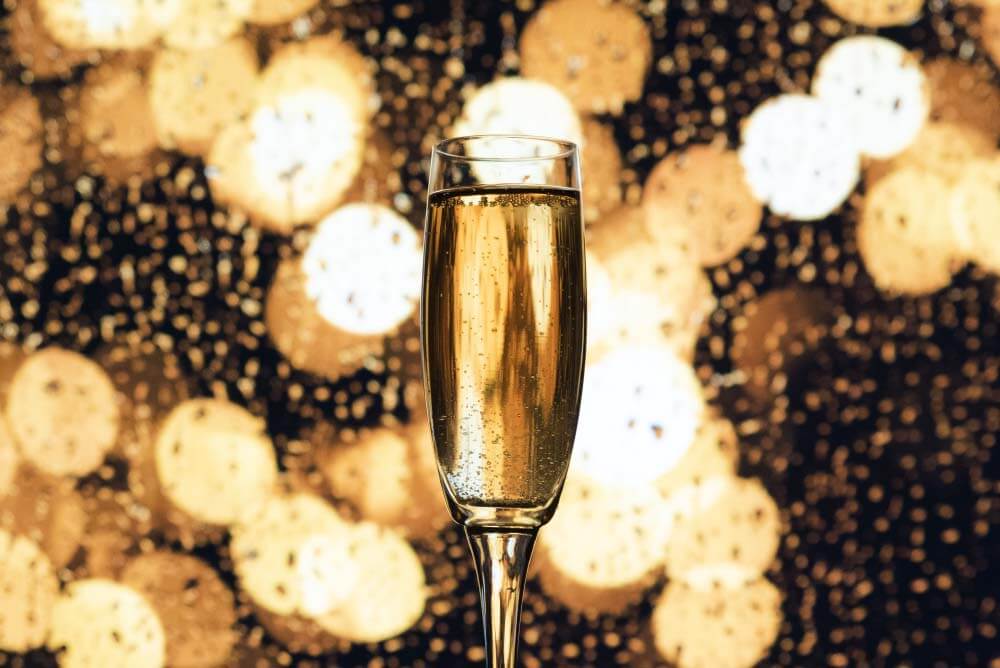 We’ve kept ducking off on tangents on these blogs with different guides and bits of advice – this one is going to be more of an insight into when we’ve been killing it and a look at some of the numbers we’ve been able to get.

Look at all that lovely green: 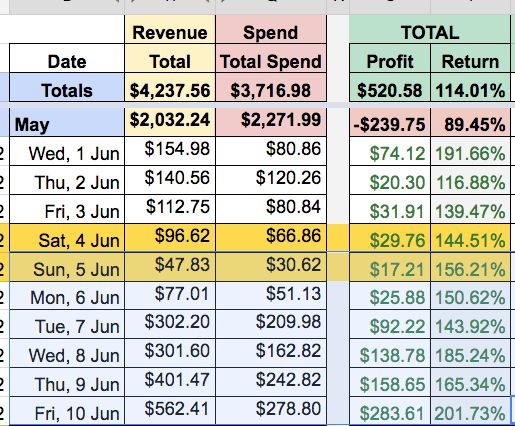 As you can see above, for our initial month of May, we lost $239.75… but you can also see how things were nothing but profit from June 1st onwards!!
May was our training period:

…and June was where that training came to bear some pretty sexy fruit!

For those of you who have been with us since the start, you’ll know we’ve not been at this very long in the grand scheme of things (for those of you that haven’t, you can play catch-up here!)

Rob and Peter at Native Ad Buzz got Dan and I involved in March, and we were complete newbies to arbitrage. ‘Yes, yes, we know all this already – why keep banging the same drum Jake?’ I mention it again because the success we achieved was reached in under two months. We signed on with Rob and Pete in March, learned what’s what and set up our site in April, and started running traffic at the start of May.

Our first campaigns in May gave us the opportunity to put into practice our gradual CPC reduction method to gradually increase traffic amounts and spend in order to get good numbers to convert with our AdSense and Content.ad units – Dan talks about it in detail in blog 7. In the following image, you can see how we started off spending on average about $50 a day, and initially made almost nothing back:
May – our first month

…admittedly, our first few losses were a result of not knowing how to manage Outbrain properly – our campaigns were running continuously, and we wasted $50 a day on a campaign we hadn’t even begun to dial in…

Our May training period gave us the chance to find and introduce a couple of killer campaigns – a lot of our time previously had been on concentrating on writing good material, so we felt ready to run with some good stuff. After selecting the couple we wanted to put money behind, we did our CPC optimisation, then stepped things up with our headline/image optimisation approach. Again, Dan discussed this in Blog 8 in more detail. The method means you have the option of pulling the winning headline/image combo from your original campaign, canning the original, making the winner into a new campaign, and just lumping everything onto the winner …OR… keeping the original campaign with your large number of variations on headline/images and running the new ‘winner’ campaign side by side. That’s what we did. Why? Having found the winning formula so early on meant we were still constrained with the ‘training wheels’ Outbrain impose on their new customers… i.e. an initial limit of $200 per day spend on each campaign. 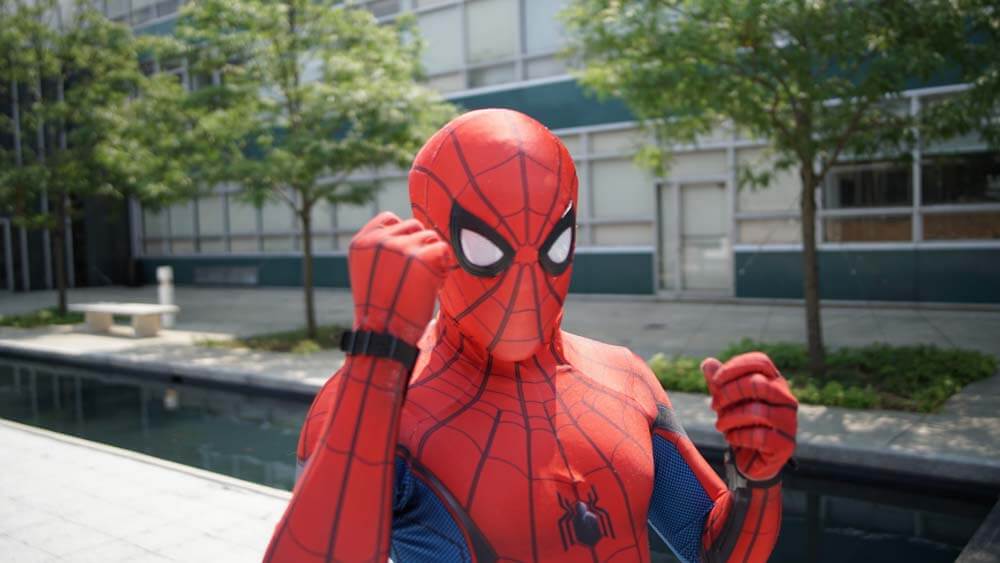 NB – to get that limit removed, Outbrain told us we needed to prove we could reach the $200 limit per campaign each day for a 2-week period, and after that they would bump the limit higher. However, thanks to some schmoozing with the support staff via email, we got this done a bit sooner. It pays to make friends! They bumped us from $200 – $400 a day per campaign.

By running the initial campaign alongside the new optimised version essentially gave us the opportunity to spend $400 a day instead of $200 before our spending ceiling was raised. And as you’ll be able to see below, that caused a nice spike in our overall profits:

You can see it in our Content.ad data too – and you can also see that we had to pull back on the reins as well (more of that in a second): 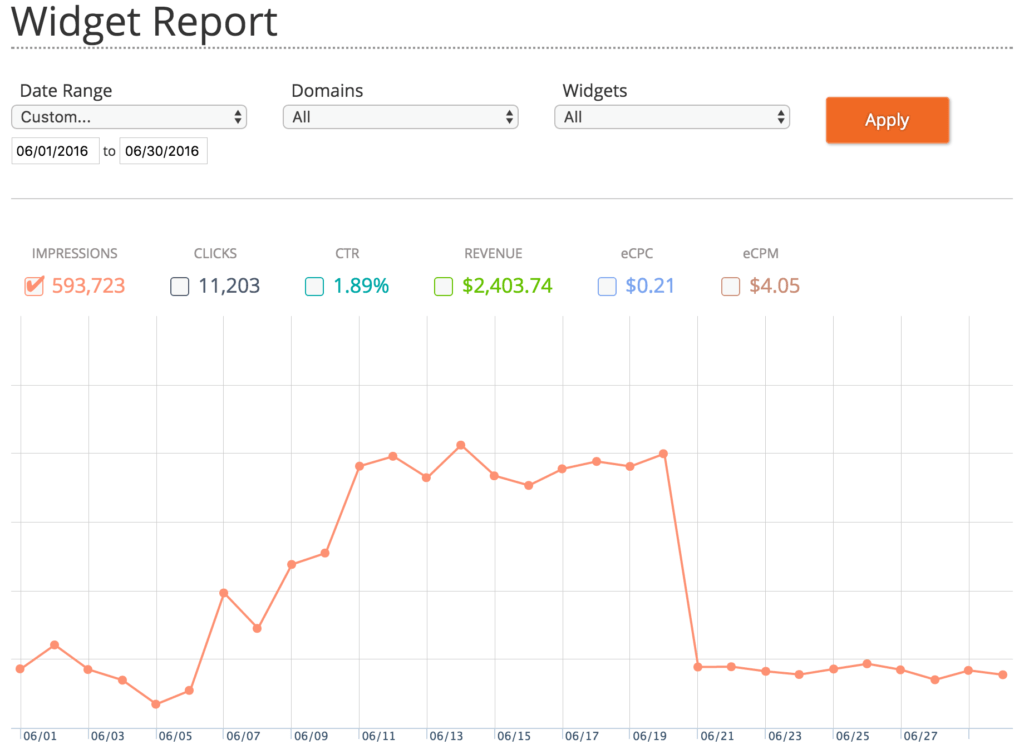 June was the perfect storm of us realising the different optimisations techniques we have discusses with you guys, and of putting them into practice. The main ones being blocking bad traffic sources, optimising slideshow ordering and layout, and pulling out the best headline/image combos. May gave us the time to try a couple of campaigns out, and we quickly got a feel for which ones would gain traction and which wouldn’t – when you know, you know!

By June 1st, we had 3 strong campaigns optimised (two unique ones and one an optimized image/headline variation) with these three methods, and we just ran with it.

Adsense success for June (again, note the drop off):

The psychological benefit of seeing profit pretty early definitely helped us stay motivated and encouraged us that this arbitrage game was one we really wanted to play. Hand on heart i’d have found it difficult to keep positive if i’d have just seen losses for months on end, hearing that the white whale of profit was out there but not seeing it myself. But I promise big success is definitely possible, and these numbers should confirm that! If we can do it, you can! Pete and Rob at Native ad Buzz have been invaluable, and their insights have kept us on the right track. If you can speak with those guys, definitely do! Once again, Dan and I were completely new to this field – it’s just been persistence and a well-organized approach to the process that got us to such good results so soon.

The main difficulties we faced were not so much problems with our method or approach, but more a result of things having picked up way ahead of schedule. Dan and I are pretty confident in our abilities, and got involved in this project because we knew we could make a success of it if we were rigorous and methodical – but we both came in thinking it would be maybe 4 or 5 months before any real money started to come in.
In fact though, it was the 27th of May when our profit run started, and that was almost exactly a month since we began running traffic at the very end of April/start of May.

Because of the nature of how Google and Content.ad pay out, cashflow has been our biggest problem. We didn’t factor in how long it would take to see the fruits of our labour, payments-wise, and it has definitely hampered how we’ve been able to recycle our cash and scale things up. We made a decision as a group that we wanted to be in control of everything ourselves – we considered factoring (I didn’t know what this was either, but essentially getting paid daily by a 3rd party who then collect adsense revenues on payday, and they take a profit too). It has benefits, but we wanted to keep control completely in-house so we could understand everything involved in the arb process.
Considering how soon things came about, June was amazing – 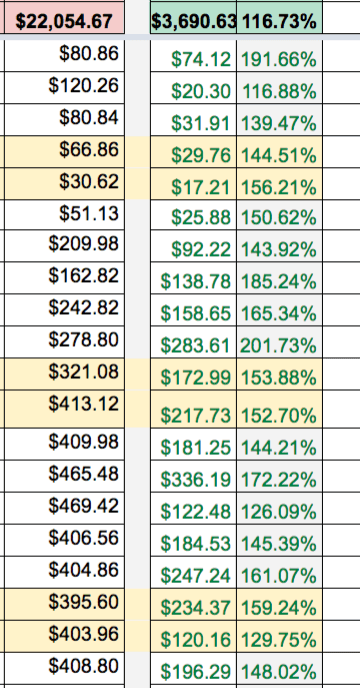 Cashflow was the key issue though. As you can see below, after nearly 2 weeks of spending around $400 a day, we didn’t have the cash to reinvest at this stage, so had to drop our spend back down to much more modest amounts: 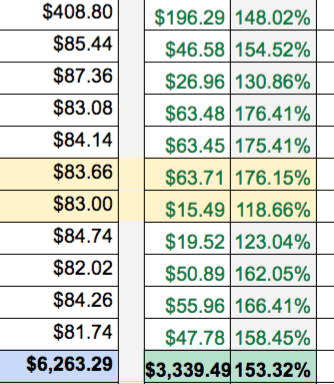 I know this isn’t mega-bucks, but it’s still a pretty large chunk of cash to be spending each day – seeing it come in in the spreadsheets and analytics was obviously great, but until it’s in the bank account it’s all very worrying. As we had not received any payments from either AdSense or CAD (our snazzy abbreviation for content.ad, don’t mind it!), June was also pretty stressful. We’ve highlighted before how important it is to stay compliant with AdSense, and having not had our compliance completely confirmed (alliteration, don’t mind that either!) by a transfer to our bank, there were some nerves.

But fortunately, our worries were unfounded! 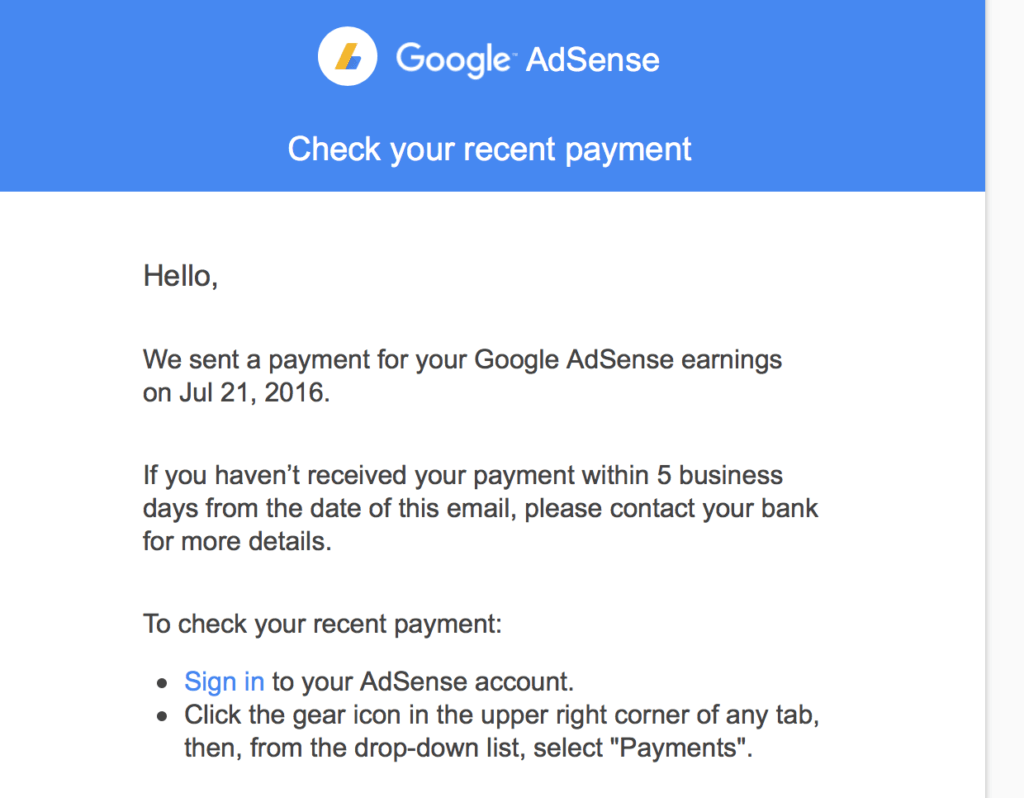 Our success carried into the next month too: we actually had a 37-day profit streak from late May through to early July… but then July 6th hit us, and suddenly we were arrowless. CLIFFHANGER TIME!

Look at that red. Scary stuff! Sorry to have to leave you in suspense, but Dan’s going to get back at you with what happened next time…