Hey – great to have you with us again!

Dan’s taken the lead on the last few entries, so it’s my turn to step up today. [Where have I been, you ask? Copenhagen. Why? I have a Danish girlfriend. AdSense profitable, and a Scandinavian girlfriend? It’s all coming up Jake!] And good news, we are bringing your more good stuff RE optimising campaigns as best as possible!

Last week Dan killed it with a run-through of the first three entries from this table (https://www.nativeadbuzz.com/blog/blog-8-optimise-prime-transforming-your-profits/), which was put together for us by Pete and Rob at Native Ad Buzz in order to know what we needed to keep a handle on going forward.

The pink below is what he took care of last week, and the blue is what i’m going to take care of today!

I’m going to break Image optimisation and headline optimisation down into two separate sections, though bear in mind that we approach them together as we build our campaigns. The headline and image need to have a relationship to really optimise things, but for sake of ease I’m doing it step by step here!

When building campaigns, the image used for the Outbrain headline/image combo is what we focus on. This is what the user sees, and is what will be enticing them to y/our site.

We use NAB as our first port of call to see what’s already working in an area we are hoping to run a campaign on.

Because i’m a complete nerd, and because it’s right on trend at the moment, let’s use an article I just wrote about Pokemon Go as inspiration… 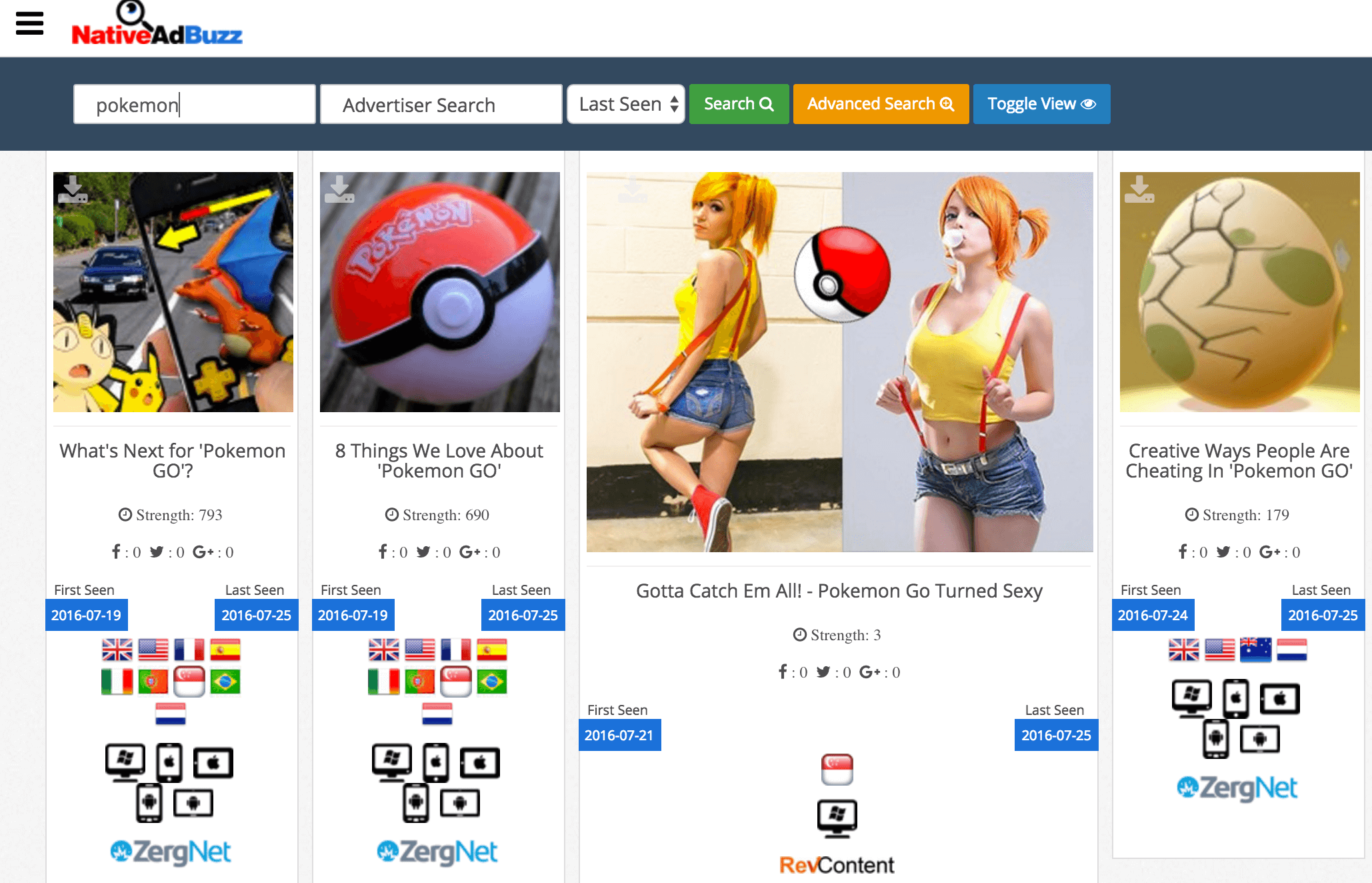 From the search results, the one that’s immediately caught my eye (and that’s what a good ad image should do!) is the top left offering (run a close second by the tank-top girl, admittedly)…

Zooming in, we see this: 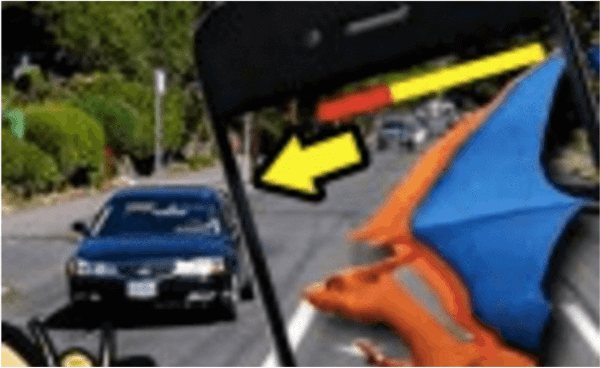 We also get all the NAB stats, which are super useful for digging deeper into the actual success of the ad elsewhere on the web:

…but for now we are just scouting images to get a feel for what would work – and let’s run with it, assuming we are going to build a campaign about rare Pokemon to be found in Pokemon Go (nerd alert).

Why do I like this image more than the girl in the tank-top? I think it has a great balance between the content we are targeting about (Pokemon), a real image that is recognisable and not too obscure (the car), and things causing intrigue (the arrows). It made me want to take a closer look, and to find out what the arrows are referring to. A rare Pokemon hiding under a perfectly normal car perhaps? I better click and see! Bingo – a session is born! Rinse and repeat!

And not to be fixated or anything, but back to tank-top girl again…

Though she’s lovely, another reason I’m not all for it is compliance with Ts and Cs. If you read our earlier blogs you’ll remember we got stung by AdSense for having a couple of articles about alcohol – only on closer inspection did we read how that was not allowed. AdSense is also hot on not overdoing things with nudity/explicit content (I covered the G/PG/R toggle in Content.Ad a couple of weeks ago too actually: https://www.nativeadbuzz.com/blog/productivity-hacks-analytics-theia-slideshows-and-time-saving-tricks/), and now real money is coming in, things have gotten serious. So yea, I’m super cautious, and don’t want to do anything too edgy to rock the boat!

HOWEVER – a caveat to that. I’m writing with the assumption that generally the images used in driving traffic with campaigns will also be featured within your content. But actually, my caution might be slightly over the top… it took us a while to realise, but there is actually a clear distinction between the things going on on the Outbrain traffic-driving side, and on the Adsense-hosting website side. The images used to drive traffic to the site don’t always have to appear within a slideshow… in fact, it can be good practice to leave them out.

Why? A user will be looking for it as they click through – saving it until the end, or even better, holding out on them completely, can be a great way to drive up page views per user… but again, caution – you do not want to promise something with your ad that you cannot deliver with your content. This is a quick way to fail to get Outbrain approval for your campaign.

Dan’s already taken you through building the campaign within Outbrain (super tedious, we know). To minimise the tedium and having to keep re-doing things, we work on nailing it from the start, which includes getting the images we think will get the most traction. So, for an article about finding rare pokemon, what are things that could grab attention? Images that include famous landmarks, images focussing on mysterious locations, general images with Pokemon, and, like the example above, use of selective arrows and circles on difficult-to-see sections.

We find our 5 or 6 images using NAB and searching for intriguing content, then spice them up a bit: 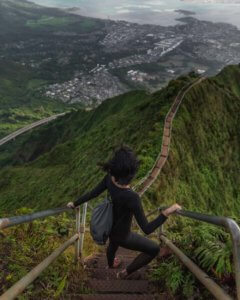 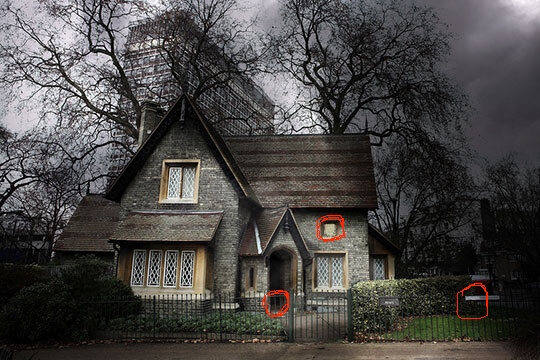 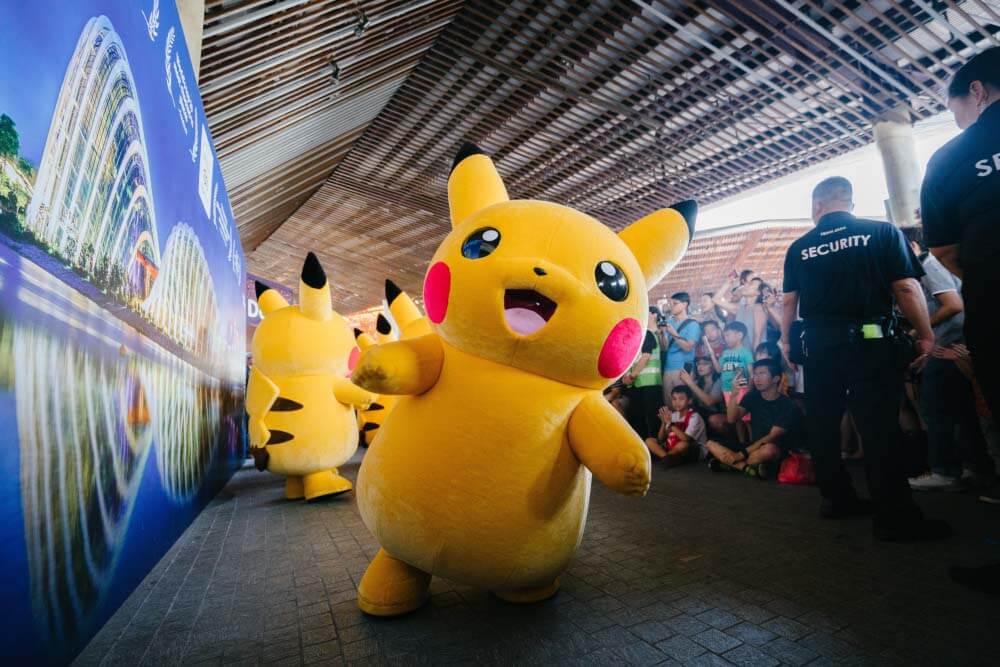 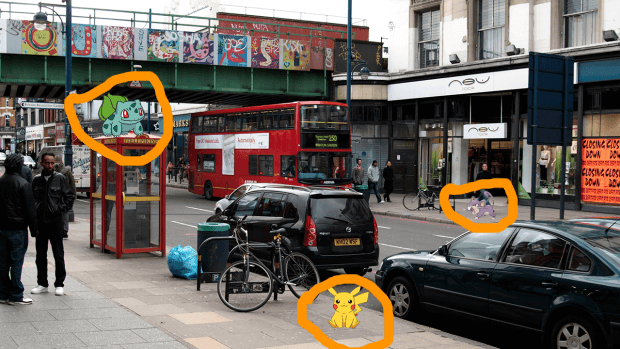 It creates intrigue, and we’ve definitely seen an uptick in our CTRs as a result of more considered images for campaigns. Ditto for cropping out and zooming in in sections of images: 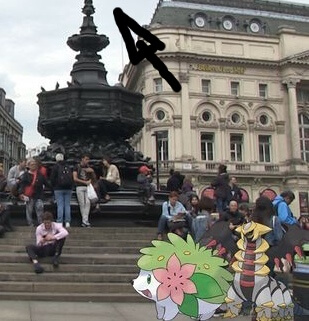 Is there a Pokemon at the top of that fountain? Click to find out…

To get more of a feel for what we mean, play around with Native Ad Buzz. You’ll see plenty of successful examples to replicate!

Replicate them 5 or 6 times and you’ll have the images you need to optimise your campaign beyond the average!

And while we are at it, an additional comment regarding site branding and voice. In the process of building a niche, you’ll likely develop a voice that your readers can recognise and relate to. That’s cool, and great for eventually building up a Social Media following.

But don’t bother with it for your headlines. Your advert will be shared by Outbrain on various different platforms, and will reach all sorts of people. By sticking to your niche (french squirrel lovers/amputee burger aficionados/etc) within your actual headline, you’ll alienate everyone else. Keep things more general, and you’ll increase traffic from demographics you were not expecting – more footfall on site, and hopefully more clicks! Proof: 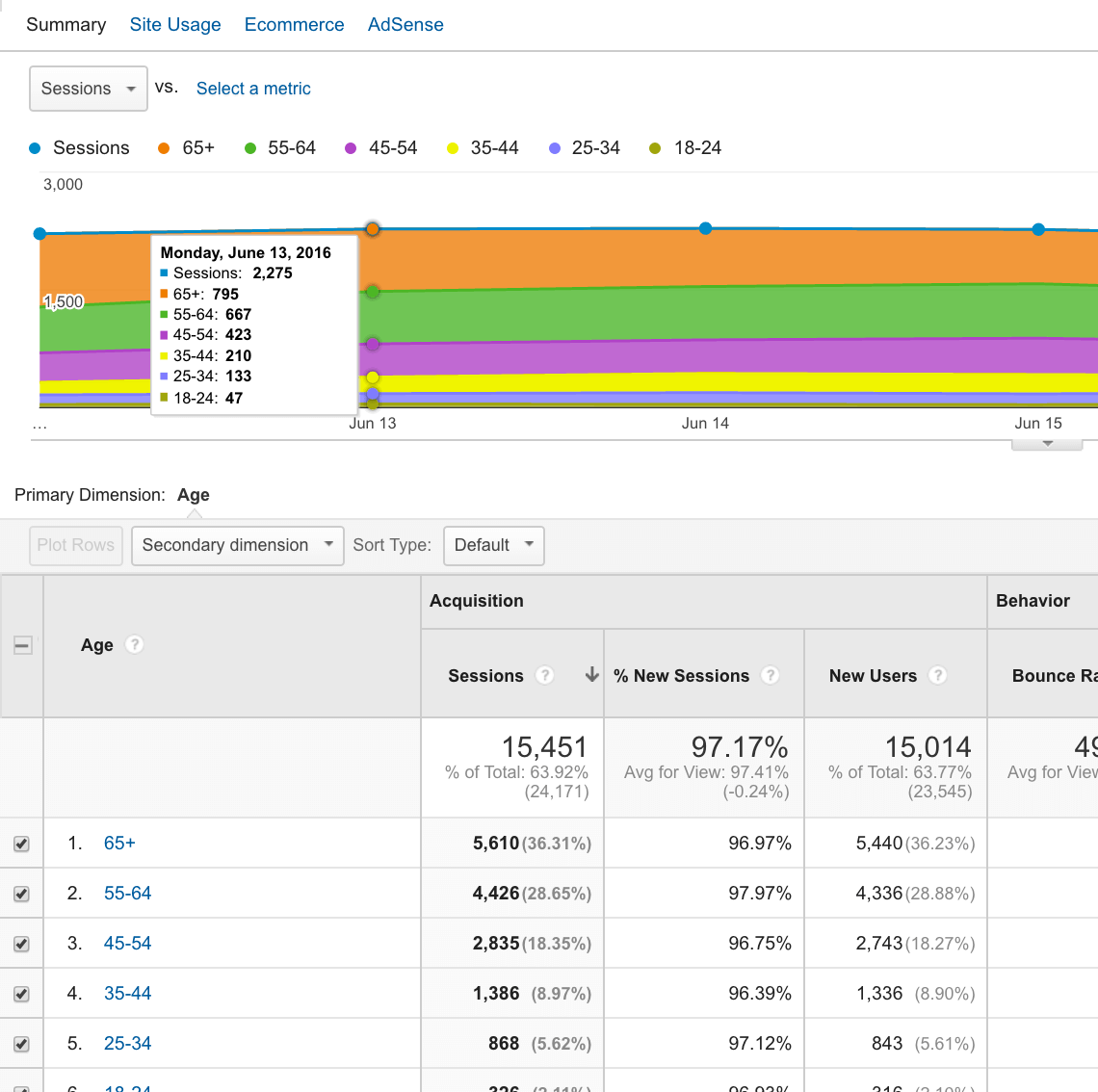 We started off writing for a young demographic (18-35), and expected our readership to fit that profile. But after a few general headlines run through OB, we ended up with quite the cross-section… and essentially the opposite of what we expected! Age before beauty…?

Rob and Pete at NAB have been superstars in terms of enabling to get to grips with headlines, and what makes them successful. It can be daunting at first (well, either daunting, or just something you simply don’t consider the importance of… either or!), but with practice and a few key things to bear in mind, you can be writing headlines with the best of them.

From what Dan showed you last time in his section on identifying profitable combos, there are clear distinctions between a good headline and a bad headline. It wasn’t something I had given much thought to.

What do you reckon will gain more clicks?

‘Do you know about the 7 rarest Pokemon the experts have found? You have to see number 5 before it’s too late!’

They both describe the same thing, but I’m plumping for the latter! Why?

It offers a combination of scarcity/urgency, social proof, numerical confirmation, and curiosity!

Including Numbers: numbers in headlines serve to create a sense of the known for a user. They will be expecting a specific amount of slides/content, and makes clicking your ad less of a gamble. Essentially, they know what they are going to get. Top tip – odd numbers work better than even!

Curiosity: self explanatory I reckon! Citing the ‘rarest’ pokemon, rather than just ‘rare’ gives the ad a sense of valuable content, and that it has something special to offer the reader. Make sure you deliver on the content-end, and your headline is justified!

Scarcity: if an article is offering something that might not be around for very long, there is more incentive for them to click on it!

Social Proof: ‘the experts have found’? Then I want to find them too! Giving people an insight into what others are using/doing is like catnip – people are super curious about others, so this is a great psychological tool!

Admittedly that example headline is a bit too long (it could be split into 4 different versions that each allude to a category above), but you get the idea. What we tend to do is pick our 5 or 6 images using the above methods, then pull together a list of 5 or 6 headlines that address the tropes I just mentioned. That then gives us 25 or 30 combinations to run with, and gives us more chance of finding a hit using Dan’s great method from last week about working out the most effective combos.

Start with great images and headlines and you’re sure to end up with more winners than losers!

Actually – as I started this campaign today, let’s get interactive!

I’m going to paste a few of the headlines I have used myself. Hit me up with which one you think will do best, and i’ll dig into the stats in a couple of weeks and see what occurred…

The Pokemon Go stories they don’t want you to hear!

You have to hear these 7 stories about Pokemon Go!

People are getting seriously hurt playing Pokemon Go – here’s how

Next week? A really important look into AdSense testing and optimisation. We’ve started to bring about some serious increases to our earnings as a result of focussing on AS stuff, including how (and why!) to set up experiments within AdSense, and the experiments that have really worked well for us. Until then, practice your headline writing and your image selection, and get some combos together to optimise your campaigns to the next level!