We hope you’re well – here at NativeAdBuzz we’ve been on top o’ the world, devising sneaky new features to our site our competitors will HATE…

And we’re glad to say many of these awesome features are soon-to-be-released, next week, so make sure you don’t miss them!

If you’re not already a member, claim a $7 trial by clicking here!

In today’s blog post, we’re going to cover how YOU can capitalize on the spring and summer season, to make more sales and attract new customers.

Give us a minute, and we’ll show you!

In fact… let’s just show you now. In this post, we’re going to look at 3 seasonal adverts found inside the NativeAdBuzz software – these ads are all targeted towards the spring or summer ma4rkets, and advertisers are releasing them now to take advantage of the ‘summer mood’ that’s slowly starting to make its way into the UK!

So without further ado, let’s have a look…

Alright, so here’s the first advert we’re looking at today. 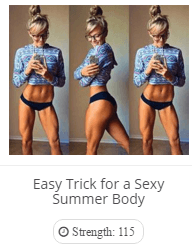 Kinda generic… kinda ‘seen before’… kinda makes us feel wanna crucify the adverts creator for being so lame and unoriginal.

(On a side note, damn… that chick isn’t even that hot! Too skinny for my tastes, I like some curves. But this ad isn’t aimed at men, it is aimed at women, and a lot of women crave tight toned bodies this time of year)

Ok… so some bad points… now why are we featuring it?

Well, if you’re like us, chances are you’ll have thought the same thoughts – it’s not original enough, I’ve seen that image loads!

And that, in part, is true. BUT… the reason this type of advert is seen so commonly is because it works. Sure, it might appear over-done to us marketers… but in reality, the reason they continue to run, is because they’re getting results!

Just have a look at the stats for this specific ad…

Ok, so the graph itself is pretty up and down… there’s even a slight downward trend visible in April, but it’s been running for more than a month now.

We’ve seen it on 70+ publishers and it continues to gain strength.

So, how can you use this ad in your marketing campaign?

You’ve probably heard the phrase ‘don’t re-invent the wheel’. And it couldn’t be more true. This image has been doing the rounds but the headline on this ad is focussed at the seasonal “beach-body” crowd, and that is a hungry market.

While it’s always great to add your own unique spin on things, you can take what’s already working, repurpose it to target it to the right seasons and markets, and watch your campaigns explode!

OK, so let’s look at the second example… 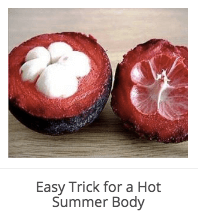 This ad headline is similar to the one we just looked at, in the sense that it’s promoting an ‘easy trick’ for a hot summer body.

Actually, the headlines are almost identical – but notice the difference in picture. The previous ad features a woman in serious shape…

The second features what appears to be an exotic fruit (although in the office we had guys thinking it was dinosaur eggs)… did I mention we’re doing a staff-clear out, and want a new team?

Ok I joke… our team are great… most of the time…

But here’s what we really like about this ad.

The headline gives a specific benefit. It promises a result. In particular, a result almost everyone would want.

But the imagery… well, they use that almost deceptively to draw interest.

This ad performs so well because it makes you actually want to click through, even if you’re not initially interested in the benefits of the headline.

Which means you’ll click through and head to the advertisers site!

The point I’m trying to make, is that you can easily instil a sense of intrigue in anyone your advert is shown to, to make them curious, and end up checking your site out. 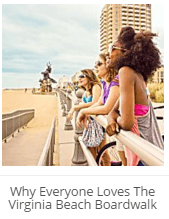 Here’s a third ad I want you to take a look at. Now, you might be saying to yourself…

‘This ad doesn’t look special – why are you mentioning this?’

But there’s a reason.

And a good one, at that.

Now this is going deep into psychological ‘trigger’s’, and you may think it’s a load of garbage…

But for those of you who spend a lot of time working with native ads, and know that tiny triggers can make all the difference in your campaigns, then listen up.

You see, this ad – of course – is well-targeted to Virginia locals. That’s obvious.

The freaking headline talks directly about it!

But here’s the thing…

The image in question features a group of girls.

They’re out together – enjoying the sun – having a good time. There’s smiles on their faces, and they look hassle-free.

What does this have to do with anything?

Well, I’ll tell you a little secret of the advertising world.

People LOVE communities. A sense of belonging. A tight-knit group they can spend time with, rely on, and laugh with.

And while it’s an incredibly subtle trigger, the fact that this advert features a group of girls having a good time, subconsciously attracts humans to view it as a ‘positive’ ad – thus compelling them into clicking it, and seeing for themselves why everyone ‘loves the Virginia Beach Boardwalk’.

I know, it’s a minute element – but the power of a community should never be over-looked during your advertising campaigns.

Find a way to tie it in with your market, and your next campaign could be *that campaign* you remember for years to come.

So think about it…

You can see thousands of adverts that use summer-season marketing in their campaigns inside the NativeAdBuzz control panel – if you’re not already a member, claim your $7 trial by clicking here.

Most importantly, just take the time to think about your advertising campaigns.

Make sure your ad appeals to the masses… and capitalize on buying trends to profit.

Next week’s article will cover more evergreen opportunities that are hot all year round:)