Glad you could make it. Jake took you through our native ad aribitrage success in June in last week’s blog and so it falls to me to talk you through the opposite of that, or at least what feels like the opposite.

Since the end of June, we’ve struggled.

On July 5th, everything was peachy with the world. I’d woken up from July 4th (with a modest hangover) and seen us make our biggest one day % profit (95% ROI). Business was very much as usual that day: we smashed another 80% ROI and I went to bed feeling pretty good. Our cash flow problems were sorted and we were ready to start scaling again. 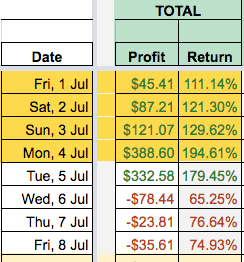 I get up the following day, though, and disaster had struck: our AdSense arrows were gone. Our site suffered. CTRs dropped. Profits dropped. I’d been thinking we were going to be making $300 pure profit a day (which is >$100,000 a year) or more and instead we were staring down the barrel of daily losses. These are the perils of native advertising arbitrage.

What has followed has been nothing short of a nightmare, and I know this is a problem that many of you have faced. There’s been some pretty interesting and insighful discussions on the Native Ad Buzz forum ( (http://forum.nativeadbuzz.com/t/definitive-nessie-thread/) about it.

We tried all types of things. We were moving around units, chaging ad styles, adding borders, adding backgrounds but no combination seemed to work. We Googled as many possible variations on “Nessie arrows disappeard”, “AdSense arrows gone”, “AdSense native ads help!”, “Nessie arrows gone profit plummet” to try to see what methods other people had tried to get them back. Thing is, most of it was just speculation.

We were getting hammered at this point, as you can see from all those red numbers above. (We actually made it worse for ourselves by shifting one of our widgets from Content.Ad, which had been pretty consistent, to RevContent which – and I’m not saying RevContent are bad – wasn’t the right move for us at that particular time.)

What makes it difficult is that Google’s guidelines (which remember changed recently) are a bit vague and they always claim that everything is automated: in short it seems impossible to get a straight answer to the question of how to get AdSense Nessie arrows back. They don’t seem to make like easy for us native arbitrage types, right?

After some rooting around though, we eventually we found a direct link to real people at Google! I’m not saying it’s a huge secret but they certainly don’t advertise it and at that point I’d never seen anyone else give a link to it: maybe they didn’t want to give away their big tips!

Here’s the screen and here’s the link.

I filled out the form, explained the problem (“Our Nessies arrows have gone, what can we do to appease the Google gods and get them back?”), and two days later we got an email from a real live person who very nicely explained exactly what we needed to do.

This is what they told us (verbatim):

Now, while these are intuitive, it’s amazing to get concrete feedback on what Google expects. Particularly with respect to the 50 pixel distance: this was something we’d never considered (maybe we were dumb not to!): in fact we ended up revising the order of our content to make this easier and then noticed that that order matched how some big, succesful sites lay out their content. (Actually, andrewufi on the Native Ad Buzz forum says that he used 20 pixel padding on the top and bottom of his ads and got his Nessie’s back.)

Like the lemmings we are, we immediately set about following Google’s instructions. We implemented all the changes (and also added in “ADVERTISEMENT” written explicitly above each ad) and then waited.

Given that the control of the Nessie arrows seems (or is said by Google) to be automated it’s difficult to know long it should take for changes to kick in and for Google to register them.

Dealing with a real human (we did wonder if “Amanda” might just be a Google AI, but if it is, it’s scarily good!) we got a bit more insight into this question:

It turns out it was less than 24 hours. Good to know. Also, Amanda’s explanation implies that every time you change something on the backend of your site, Google will, at some point, rescan to check if you have fallen fair or foul of their guidelines. This means that if you keep changing things it’s difficult understand what effect the change has had.

The arrows came back. This is from September 1st.

However, our performance was still a bit shitty. The changes that Google suggested are things that reduced our CTR. So we then set about seeing if we could track back. We started making a change a day, waiting 24 hours, ensuring the Nessie arrows were still there and then making another change.

And over the next few days we were able to push up the CTR and the profits. On Friday we had what we consider our first decent day in a while: 30% ROI.

Hopefully those explicit instructions, given to us by Google, can be of help to others. There’s a lot of speculation about what Google punishes you for: we can’t say these are definitive but they have, so far, worked for us.

See you next time,
Dan