So if you’ve been following our recent Legal Compliance series, you’ll know we’ve looked at some of the major issues advertisers face, in terms of ‘staying compliant’…

And in the last post we looked at legal specifics, from the USA’s ‘FTC’, and the UK’s ‘ASA’.

In today’s post, we’re going to look at the 2 big ‘grey areas’ in the native advertising world… as well as practical tips to ensure you don’t find yourself on the wrong end of these industry regulators…

Now just before we get started, I wanted to bring something up.

You see, at NativeAdBuzz we are always following industry news, and one thing we’ve noticed, is…

‘Just because you’re only running an ad or two… does NOT protect you from the law.’

It may seem tempting to ‘bend the rules’ in order to make your ads more appealing, but you risk being blacklisted by ad networks, as well as potential fines, and even criminal prosecution, so make sure you know the consequences!

If you want to see thousands of legal, compliant ads (and evaluate their strength in the market), you should take a $7 trial to the NativeAdBuzz software, where you’ll get access to a plethora of native ads!

One of the most confusing things for new marketers to understand, is that there isn’t a ‘one-size-fits-all’ approach to advertising law, and because of this, you should always err on the side of caution.

Let’s look at some of the most important Native Ad rules (from a legal perspective) … and how you can ensure you don’t fall foul to the law.

Disclosures are required by all industry regulators (and publishers) to clarify the intentions of your advertising message to consumers.

In essence, the readers of your ad need to know it IS an advertisement – and that they’re being sold to.

Which is why, you should;

Make your disclosures and ad units clear, and distinguishable

The regulators will also look at whether they think you’ve made your disclosures clear enough. For instance, if your ad is image-based, they may deem a small piece of text to be insufficient, due to consumer’s attention being directed at the image.

Similarly, if you were running a content advertorial, an image featuring a disclosure likely wouldn’t be noticed – unless it’s a focal point of your page.

Also… if you’re running video ads, the disclosure should be displayed on the screen long enough so that any viewer would be able to see it, read it, and comprehend what it is saying.

…And the FTC have begun to clamp down on advertisers who use sneaky techniques and as mentioned in the last article the ASA in the UK even went after Outbrain to make an example.

Take a look at this chart; 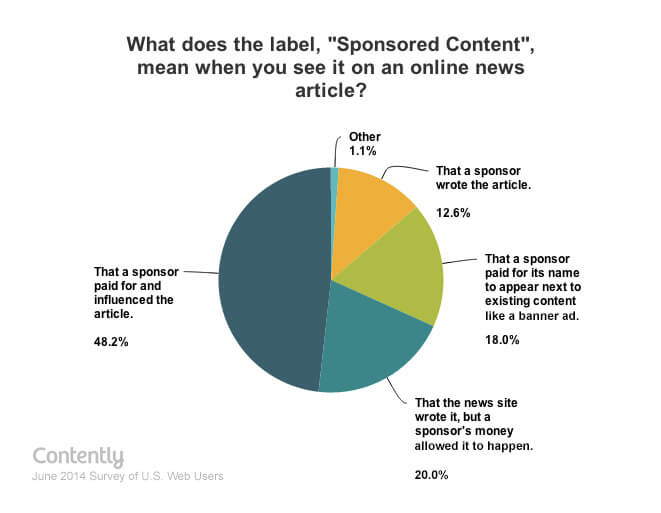 Most people would argue that sets a worrying trend – it’s really hard to know what you’re reading is from the website, or from a publisher when you see stuff like this.

You already know the guidelines by now, right? And this isn’t your responsibility because the native Networks manage their widgets. Perhaps, but there is a change a’ coming, the wind has already started blowing.

Crafty wording and camouflaged adsense ads is becoming a risky business if you want to keep your accounts safe. In a future article we will discuss how to protect your Adsense accounts, and adsense arrows, and how you can still make a profit, even if you get hit with the dreaded adsesne ban…
but for now, let’s move on to our next topic >>>>

One of the biggest areas of concern for many advertising marketers and publishers is the claims included inside an ad.

There are two sides to this; the first, is a results-based claim.

‘This Woman Lost 34KG in 2 Minutes… Discover How YOU Can!’

If this were true… documented… and realistic to the everyday reader…

It would be fine.

But it’s not. The headline makes a claim that’s not just unrealistic… but also completely deceptive.

OK, so there is certainly more chance of this happening than losing 34KG in two minutes, but there must be very strong, documented, and reliable proof that this actually happened… as well as proof that the consumer has a chance of achieving the same.

Here’s some examples of legitimate native ads, that don’t offer a direct claim… but still have a BIG benefit attached.

They’re acceptable, because they don’t make you specific promises that if you do XYZ, you’ll achieve XYZ.

If they DID, they’d need to be able to prove their claims… or else face legal action…

And if you want your ads to stay compliant, you absolutely MUST not include claims that aren’t 100% true. Now the second major area of concern surrounding claims, is to do with infringing the rights of a person or organization that these claims directly or indirectly reference.

These includes using celebrities, TV channels, news broadcasters, and even local companies. If they haven’t expressed their permission… or if you’re fabricating a story…

You also can’t imply that your product or service is endorsed by these companies; if your content was purely editorial, the law changes, as you have rights under the free-speech and fair-use rules, but advertising is NOT covered.

In short – unless a celebrity or other notable person/organization has given their express permission, and the claims you make are 100% true… stay away; fail to do so could land you in a LOT of legal trouble.

To help make sure your Native Ads comply with the disclosure and claim guidelines, we’ve compiled a short checklist for you to follow.

Work through it, and try to keep it handy whenever you create a Native Ad – it can save you a LOT of legal trouble later down the line.

And that’s a wrap for today, folks.

We’ve looked at what you should and shouldn’t include in a disclosure… and some guidelines about making claims in your ads.

In next week’s post – the last part of our ‘Staying Compliant’ series, we’re going to look at loads of native ad examples that are legit… and we’re going to study those that aren’t.

All the ads will be pulled from NativeAdBuzz, our native ad tracking platform.

It allows you to easily view thousands of different ads, as well as tracking their data, performance history, and more!